DRIVING. So you think you get your license when you’re 16, and from there it’s all going to be an automatic piece of cake, right?

Not so fast. Here comes a foreign country with backwards roads and backwards rules, and suddenly you’re like a newborn again (for at least a quick minute).

And it is inevitably full of unexpected miracles.

You have to observe and absorb local customs, and learn how basic things operate differently than what you’re used to. You have to figure out the ways they scam tourists (ahem- taxi mafia -ahem)

Then you have to totally surrender your definition of “normal” and embrace a totally different version of normal. This is very very good medicine for any conditioned myopic world views…

For example, in Thailand, it’s normal to never ever ever put toilet paper in the toilet. Lest a toilet explode.

It took me a while to get used to this, and I probably did untold damage to numerous septic systems before i finally broke my unconscious westernized habit.

And poof. Now I am a septic-system-conscientious tourist. I’ve got strategies.

Then of course, there is driving. You have to flip your standard way of doing things 180 degrees, and invert everything backwards.

Driving on the right side of the car, down the left side of the road… this has been a whole exercise in strengthening my ability to shift perspective to the opposite of my standard viewpoint.

I love how life initiates us gently into these things. It doesn’t just throw us into the deep end (except, of course, when it does).

Here in Thailand, I first learned to drive on the left side of the road in a very gentle environment — several weeks ago on a tiny island called koh Phagnon.

It has a mellow vibe and very little traffic… just a little two lane road which took me everywhere i wanted to go.

After my initial unfortunate scooter crashing incident (within 2 minutes of renting it), I cautiously upgraded to a 3-wheel Yamaha TriCity Trike motor scooter. 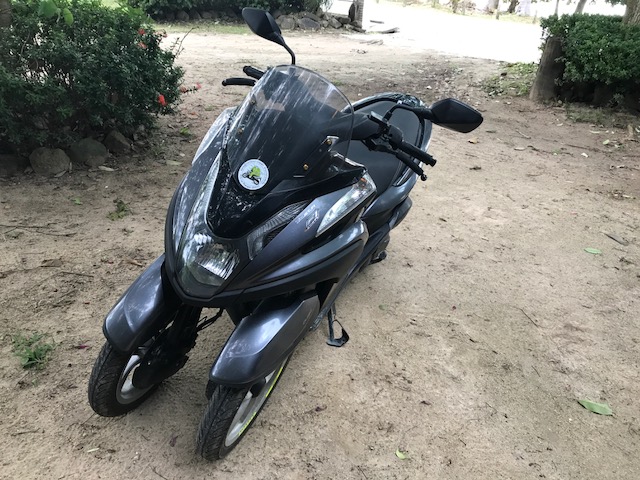 I can’t say enough about these futuristic little buggers. Trikes. Who knew? They look like something out of a sci-fi movie. I want to buy one someday. You get all the freedom of a motor scooter, but with two front wheels, so you feel infinitely more stable.

I had zipped cautiously around the west side of the tiny island, playing it very safe… I slowly melted my scooter trauma by only traveling within a mile or two of my hotel, and generally going half the speed of all the other scooters, timidly putt-putt-putting along. Totally content.

I gained comfort with the left side of the road. I gained confidence on my scooter. Life was good.

A scooter was simply not an option for me here. So I found a good deal on a rental car. I was stoked.

The man came to bring me the car, and i immediately understood why I had gotten such a good deal. It looked like a cute little jeep from the outside, but on the inside, this sucker was filthy, old, and had clearly been his long-since-retired personal vehicle.

It was on its last legs.

I love driving stick shift, but this thing was ridiculous. And I was having to drive stick shift with my left hand. While driving on the right side of the car. It was all so very confusing. And inverted. Inside out. And upside down.

But i signed the papers, and I thought – hey, what is life if not an adventure, right? I can handle this, I’m tough.

The man dropped it off for me at Vikasa, one of the best organic(-ish) healthy restaurants on the island. He gave me the keys and took off, while i happily worked on my book, watching the sun set over the gorgeous ocean view.

I worked until the restaurant closed at 10 PM. My standard routine while traveling is to find my favorite healthy restaurant and make it my daily office where i come to write and stay fueled.

I came out of Vikasa in the thick of night, a bit nervous about driving a backwards car for the first time. I started up the engine and listened to it grind and make all manner of unusual noises.

I had waited until nighttime to drive back to my hotel, thinking that the traffic would be lighter…, but all that happened was that the traffic was still intense – only now it was full of wildly brazen motorbikes, half of whom had NO HEADLIGHTS.

My hotel was a half hour west, all the way on the secluded Virgin Coast … so I prepared for my trek. I pulled out on the road, only to find myself swarmed by motorbikes, flying around me from all directions, with no concern for their own safety, coming within an inch of my car.

My senses were on high alert. What the fuck, people???
If anyone has been to Thailand they will know that some of these people are so brave it’s foolish – they drive like bats out of hell. With apparently zero concern for safety.

Sometimes there were 4 people stacked precariously on one tiny scooter! Say WHAT?? A 90 year old man was on a scooter with black smoke pouring out of the tailpipe, balancing a huge bag of god-knows-what off to one side.

Sometimes there are scooters passing you AND headed towards you, driving up YOUR side of the road. (Just because they feel like it, and hey – they’re scooters, they can do what they want).

It’s all very treacherous and hilarious. You can’t help but laugh and curse like a sailor

I kept chanting “keep to the left, keep to the left”, as I shifted gears with my left hand and felt generally exhilarated by the adrenaline rush of driving the world’s shittiest car, for the first time – on the opposite side of the road, surrounded by maniacs passing me on all sides.

The man had told me that the gas was low, so I figured I’d head to a quieter part of town and get gas when I could. I couldn’t have gone more than two miles down the road…, white knuckles clenched on the wheel…, brow furrowed, spine straight … when …

THE CAR STOPPED IN THE MIDDLE OF THE F*CKING ROAD.

That’s right.
The car freaking died in the middle of the road.

Now, not to brag, but, ok, ok – i’ll brag – i am something of a skilled stick-shift driver. I learned to drive on a stick shift. My first car was a stick shift. I can maneuver a stick shift in the rain, in hail, in the snow … I have zero issues with stick shift.

This was not an issue of me not being able to handle a stickshift.

I try to start the car, as cars honk and motorcycles go whizzing by, utterly oblivious to my dilemma. I can’t even get out of the car. I am swarmed on both sides by insane drivers. Some of whom have headlights. And many who don’t.

My hands start shaking wildly. My (normal, mild) hand tremor goes into full ballistic mode. My heart is racing. I grab my phone from the relative safety of my vehicular steel bubble, in the middle of the road, and call the wife of the man I rented it from.

I begin trying to tell her the situation in a highly anxious and fast paced tone. ok , let’s be real – I was legitimately freaking out. She, being Swiss, and he, being Thai, had trouble understanding me. Understandably.

Finally a kind samaritan came and blocked traffic for me, and she and a couple of her friends helped me push the car to the side of the road in neutral.

From there I called back the rental people, and more calmly explained what had happened. Could they possibly have left me so little gas that the car couldn’t go further than 2 miles?

I didn’t think so. The car was dying. It sounded to me like an alternator issue. The man showed up a half hour later and confirmed that indeed, the car was dead.

Come to find out, apparently, he hadn’t even wanted to rent out this particular car anymore because it was on its last legs. And it just so happened that its last leg occurred within 2 minutes of me driving it.

He had driven over to help me in his brand new, lovely, automatic car, which normally rents for twice as much. He told me he would have the clunker towed in the morning, and he handed me the keys to his nice new car.

He started to go take a taxi home, but i said absolutely not, and offered to drive him the half hour back to his house (the opposite direction from my hotel).

On the drive we got to chatting and had the most wonderful warm conversation. When we got there, he told me i could just have the car for the whole original rental period, and that he wouldn’t charge me extra. We hugged, and that was that.

SO this, my friends, Is how I was initiated by life, into driving on the left side of the road.

And how i was blessed by a seemingly unfortunate incident, to get a free upgrade to a super lovely new vehicle. (After that experience, driving this kush little car is easy-peasy … and deeply appreciated!)

Miracles abound when we surrender to what is – with faith and good humor!

Now I’m zipping around as if driving on the left side is second nature. Next time i’m in London – look out urbanity – I’m ready for you!

There are always hidden blessings underneath every single challenge! Aaaaah, facepalm … laughter ..
Life is nothing, if not an adventure!